This keynote lecture consists of two parts and will address political economy of communications technology in general and the Internet in particular. In the first part, Dmytri Kleiner will present a brief history of the Internet and explain how it was initially a not-for-profit distributed network, and that as commercialization began, so did centralization, and how far from being an unintended consequence, surveillance and control is core part of the design of the modern Internet, not as a result of zealous Government espionage, but of capitalist business models based on the selling and grading of audience commodity. In the second part, Baruch Gottlieb focuses on the materiality of the Internet, which, often understood as immaterial in the imagination of rich western countries, needs minerals, real estate, energy and labour to function. He challenges the alleged emancipatory potential of the new media by drawing attention to the unfree nature of labour in the factories and mines that produce the essential materials for essential hardware, and argues that without such unfree labour, this technology would not exist. 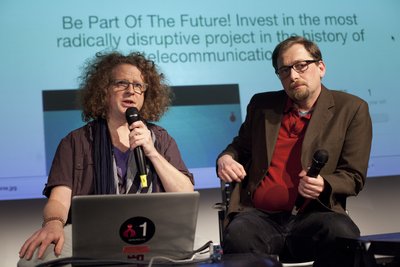 Dmytri Kleiner is a software developer and the author of The Telekommunist Manifesto. Dmytri is a contributing artist to the Miscommunication Technologies continuing series of artworks by Telekommunisten, such as deadSwap, Thimbl, R15N and OCTO.  Miscommunication Technologies address the social relations embedded in communications platforms by bringing aspects which are normally hidden from view to the foreground to be critically experienced and confronted.  In The Telekommunist Manifesto, Kleiner has published the Peer-Production licence, a commons-friendly license the author has described as CopyFarLeft, and proposed Venture Communism, a mode of worker-controlled production modelled on peer networks and the pastoral commons. He can be followed at http://dmytri.info and on Twitter as @dmytri

(Dr. phil.) Baruch Gottlieb trained as a filmmaker at Concordia University, has been working in digital art with specialization in public art and performance. He is currently Artist-researcher in Residence at the Institute for Time-based Media, lecturer in philosophy of digital art and aesthetics at the University of Arts Berlin and fellow of the Vilém Flusser Archiv. He is also curator of the upcoming exhibition series “Flusser & the Arts” based on the philosophical writings of Vilém Flusser. Gottlieb is active member of Telekommunisten ,Arts & Economics Group and Laboratoire Deberlinisation.  His first book “Gratitude for Technology” (Atropos 2009) elaborates an anthropomorphics of digital technology. His upcoming book “A Political Economy of the Smallest Things” (Atropos 2015) proposes labour models for industrial production at the sub-atomic scale. He tweets as @baruch